An Unexpected Encounter • Gathering Joy • Joyful News • Nostalgic Memories • Resolve to Victory • Onward, Relentlessly • Precious Memories • Neverending Friendship • Rustic Joys • Paving the Path to the Future • A Promising Future • Hostility • Thinking of Those Who Are Far Away • Please Answer Me • Beauty of the Mind • Wishing For a Friend's Return • Because It Is Strong, It Is Beautiful • A Beautiful Change • Purification • Profound Love • Firm Belief • Purity • To Solve a Misunderstanding • Let's Unite to Win • A Bare Heart • I'll Wait For You • Believe In Your Heart • Noble • Choice • Sincere Heart • Your Smile

HAPPY BIRTHDAY • A Birthday Celebrated with a Sword Dance • The Covert Present-Harvesting Battle • The Sonokos' Birthday • A Tale for the Two of Them • A Picture for Eternity • Our Friend's Dream • Showdown! The Four Kings of National Defense • Gifts from Everyone • The First Party for You • A Birthday of Flowers in Full Bloom for You • A Droplet of Shooting and National Defense • The Great Girl Power Operation

This only covers the important parts to be able to play.

Each character has their own colors, or elements, so to speak. There are five elements, each weak and strong to other: Fire (red), water (blue), wind (green), with a separate light (yellow) and dark (purple). Fire, water, and wind form a triangle (fire->wind->water->fire, where strong->weak) while light and dark are with each other (light<->dark). Vertexes have their own elements as well, as shown in their health bar colors.

The core objective of each mission is to prevent Vertexes (from the left) from reaching the Shinju (red squares on furthest right). The battles take place in a grid, where you can move heroes around to eliminate enemies.

At the start, the heroes will be deployed on the right. You can move your heroes during battle to different squares. Some Vertexes can push your hero back, and after the Vertexes dies, your hero will return to the tile.

Heroes' attacks can be either short, medium, or long. Short (melee) heroes can only hit tiles next to them in any direction. Medium-range heroes have a range in a circle around them. Long-range heroes can fire across a row of tiles.

Each hero in your team has their own unique abilities you can use by using the charges (flowers) in the special gauge in the bottom left. These charges are earned by defeating enemies. Each ability costs a different amount of charges, as shown below the heroes' portrait in the bottom right. Clicking on a hero's portrait will show her ability range. Hold and drag upwards to activate it.

If a hero's HP reaches 0, she will be forced to jump back and will return after a countdown. You can get a potion (with a heart shape inside it) to increase heroes' HP and boxes to get various items after defeating Vertexes.

After the mission is over, you will be shown the MVP screen and mission clear. There are three objectives you must clear in order to gain three stars and gain all three items: Clearing mission, under time limit, and no heroes being forced to retire.

If you do gacha and get duplicate hero/card with the same image and rarity, your card will automatically get a boost in skill level, as well as some other attributes.

Attack speed is the same for a character even if the card is different.

The damage Heroes inflict to enemies is as follows:

DEF is 0 by default, which is why it's not listed on the card. Effects that increase damage taken are just reducing your DEF. Damage Cut and Defense are the exact same thing. They apply a flat damage reduction according to the number of it, capping at 5000.

CritStat is based on letter rank, see the Letter Ranks for numbers. It can be subject to buffs/debuffs. So far we've only seen flat +X buffs.

FavorableMatchupCritBuff is a buff that increases crit rate if the opponent is the color the attacker's strong to. I don't think it's yet used.

CritDefenseBuff is a Hero-exclusive buff that reduces the opponent's crit chance. Not sure if it's used.

WeightModifier is the sum of the Weight values of all opponents on the same square or behind the target.

When a Hero is attacking, it adds up the Weight value on all vertex on the same square or behind the target. (Many clustered vertex = Less crit rate)

When a vertex is attacking: If the Hero is moving, no mitigation, If the Hero is stationary, Hero's Weight * number of Heroes behind the one getting hit. (Lining up your Hero reduces vertex crit rate, assuming you don't move them around.)

Knockbacks Crits will always knockback, and it's always at least 1 square. If there's knockback buffs, it will roll a chance to knockback additional squares. This chance is the sum of all buffs' values. If the roll succeeds, it will add as many squares as there are buffs. (So two buffs with 10% and 15% that's 25% chance for knocking back 3 squares).

Hissatsu gauge gain is independent of what type of Vertex you are killing.

When you rank up in-battle, your ATK and movement speed increase by 10%. Your attack speed is increased by 8%. Crit Rate is affected by the above. Knockback doesn't seem to change.

HP is combined. (strictly speaking they are still separate but the damage is distributed). ATK, CRT and attack speed are separate. Movement speed is the main Hero's (support's is ignored). Weight is 100% front Hero and 50% back Hero. Element is that of the main Hero.

+5 points for each pair from regular battle, dounle if one of the Heroes are max level and quadruple if both are max levelled.

How do I play this game?

Download the APK for Android. You can also play on PC using an Android emulator such as Nox, or on iOS, or just use DMM (you may need a Japanese VPN such as VPNGate).

What files need to be deleted to reroll my starting gacha?

How do I back up my user data so if something happens I don't lose all my progress?

Copy the yuyuyu_UserData.opy file above and keep it somewhere safe.

What kind of starting gacha should I keep?

Where do I go next in the story?

Is there anything I should read/watch/know before playing the game?

You should at least watch the first season of the anime Yuki Yuna is a Hero, and preferably watch Washio Sumi is a Hero and read Nogi Wakaba is a Hero as well, although it's not essential.

What's this error message with 3 buttons when I enter a stage?

Udon overflow, feed it to your Heroes or sell it from your inventory menu.

What's this error message when I try and start the game?

Data error, you need to clear your cache (see interface translation). If you keep getting this error, please disable any "cleaner" app in your phone or put yuyuyui into their whitelist, AND keep sufficient amount of free space in your phone storage available (You need at least 500MB free space all the time to avoid your phone automatically clearing caches, which mean about 1GB before downloading caches)

Whats the status below ATK and DEF?

Straddling (Resistance to being knocked back), Speed and Critical.

What's that button on the bottom right of the map screen labelled 勇者システム (Hero System)?

Upgrade Yusha system using medals. The upgrade is permanent, right now there's only 7 type of upgrades but more will probably be added soon.

What are the upgrades?

(In this order) Coins up, Exp up for each element, max Shinju Power up (for the daily event). Shinju Power >>> Coins > Exp

How do you get medals?

I can't 3 star a stage because of time.

Aim for criticals, if you deal a crit to a vertex, their number will be reduced by 2 instead of 1. Also, using a hissatsu to kill multiple of them at the same time will reduce their number more.

Where do I get advanced materials to raise the Heroes' level caps?

1. The daily events, stages of their colour you want on hard difficulty. 2. Farm Land of Crystals events when they appear. 3. The last stage of those crystals training exercise event also give some advanced crystals at the cost of stamina. 4. Clearing and farming some other maps will also drop them occasionally.

How do you upgrade the special attack?

Use the special udon with the flower mark. the required amount will increase with every upgrade, also be aware that the upgrade can fail if you didn't feed enough udon to reach 100% guaranteed number. (2nd udon is 5x 1st udon, 3rd udon is 5x medium udon/25x small udon )

How do you upgrade the passive ability?

Get more copies of that Hero from gacha.

Press the green exclamation mark on the map screen and it'll display 1-2 specific Heroes. Put both of them as your leader (if there's 1, don't give them any support) and they'll get a powerful bonus for that episode.

Damage per second. Each character have different attack speed. Thus they can deal different damages over time. See "Damage" tab for detail.

What's that notation you guys are using to refer to the stages (e.g. Y2-3H)?

What's the point of adding friends?

You get 50 normal gacha points instead of 20. Also the leader ability of a friend you bring to battle will activate too.

Where do I get more blessings to roll gacha?

3 Star some stages, finish quests/achievements, buy them with money. Do missions in DMM game site for some tiny amount of free DMM coins to be exchanged into blessing.

Where are the Expert difficulty maps? 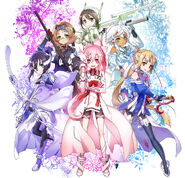 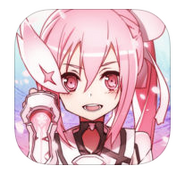 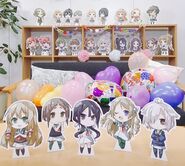 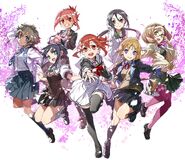 Retrieved from "https://yuyuyu.fandom.com/wiki/Yuki_Yuna_is_a_Hero:_A_Sparkling_Bouquet?oldid=23941"
Community content is available under CC-BY-SA unless otherwise noted.