Shiratori Utano (白鳥 歌野, Shiratori Utano?) is a character Nogi Wakaba is a Hero light novel series. She was the first hero to ever be created as well as the sole protector of the Nagano Region before its fall, and was planning to become "The King of Farmers".

Before the Vertex Attack in July 2015 of the last years of the Anno Domini Era. Utano was just a young middle school girl who wanted to become the "farm king."

Utano wears a normal school outfit most of the time with the exception of her outfit while farming. Utano is a pale average height teenager. She has shoulder length dark brown hair and dark green eyes.

In her hero form, she wears a bright yellow suit much like Inubouzaki Fu. It includes a wisteria flower clip with long ribbons. She wears gloves and has white bands and a saggy sleeve. Underneath is a white leotard overtop being a dress much like everyone else with dark green accents and yellow.

She has a carefree personality, and readily accepting at times. She also tends to use some English words in her speech (sometimes broken English). She cares for friends and loved ones greatly and sometimes gets caught in the moment. She often tries to seem well when extremely scared and heads off into her last battle without any regret. She loves farming greatly and has withdrawals by chanting vegetables if not touched soil for a long time.

Utano fights using a divine whip called Fujizuru. She can use it effectively with her enhanced agility to destroy many Stardust. But, being a solo hero can be overpowered quickly. She puts on her hero outfit as normal clothes and still seems to have the regular abilities excluding a Trump Card in version one of the Yusha System.

Satori: In the game, Yuki Yuna is a Hero: A Sparkling Bouquet, she is equipped with a green monkey like fairy entitled Satori. Its abilities are unknown.

Her fellow friend in Shikoku. Utano would inform her of vertex attacks and often have conversations about debating between udon or soba being better. Wakaba felt reassured to know someone outside her barrier was fighting hard and humanity had not fallen yet. When Utano was defeated, Wakaba was angered and swore to give the vertex their reward.

Her fellow miko in Nagano. Mito and Utano are very close and even Mito became jealous when Utano was getting along with Wakaba. Mito calls Utano Utanon and Utano calls Mito Mii-chan. Mito feels regret when all she can do is tell Utano when the next invasion was. They care greatly for each other and was recommended as birthday gifts to each other in Yuki Yuna is a Hero: A Sparkling Bouquet.

Despite her weapon's name meaning 'Wisteria vine', Utano's flower is the St. John's Wort. It has also been theorized to be a Plum Blossom in the past. 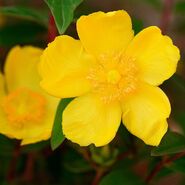 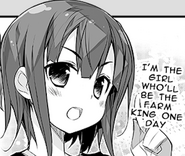 Utano in the 4koma. 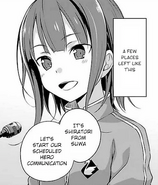 Utano in the manga.

Utano's hero form in the manga. 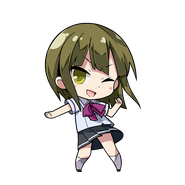 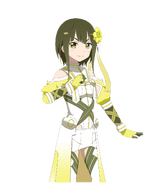 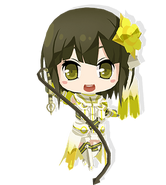 Retrieved from "https://yuyuyu.fandom.com/wiki/Shiratori_Utano?oldid=24198"
Community content is available under CC-BY-SA unless otherwise noted.