Nogi Wakaba is a Hero (乃木若葉は勇者である, Nogi Wakaba wa Yūsha de Aru?) is a light novel serialized in Dengeki G's magazine. The serialization began on July 30, 2015 and finished on January 28, 2017, although an extra chapter was published with the release of the second volume on March 28, 2017. The story mostly takes place in 2018, in the final days of the Christian Era, 300 years before the events of Yuuki Yuuna's Chapter. The six main characters form the first ever Hero Team: Nogi Wakaba, Uesato Hinata, Takashima Yuuna, Koori Chikage, Doi Tamako and Iyojima Anzu. A manga adaptation and a 3-part spin-off light novel based on the series was released later.

The novel begins with an introduction to the situation of the current world.

In the year 2015, Nogi Wakaba is an socially awkward girl who is currently in an evacuation center with her classmates. After a misunderstood and embarrassing moment, Uesato Hinata takes a picture of her and adds it to her 'treasured Nogi-chan collection'. Frantic, Wakaba pleads for her to delete it and Hinata leads her to a group of girls she was staring at earlier.

With a little guidance, Wakaba settles in with the group, and later thanks Hinata for helping her as the friends walk outside. As payback, Hinata asks if she can model for cosplay pictures; much to the former's chagrin.

An earthquake suddenly hits, and the two girls try to stay safe-when Hinata has a vision of something 'really scary'. Vertex suddenly appear from out of nowhere and attacks the evacuation center where everyone else is. Through the chaos, Wakaba discovers-to her horror-that her new friends didn't survive. Angry, she dives towards the Vertex and battles them with a wooden stick. It easily breaks, and Wakaba is forced into a corner.

Suddenly Hinata appears, telling her 'it should be there'. In a broken alter, Wakaba finds an old katana that suddenly turns new again once she grabs hold. Not having a chance, Wakaba takes down a few Vertex and the rest regroup. She and the survivors make a beeline for The Great Seto Bridge, Vertex on their tail.

Three years later, Wakaba has assembled a team of 'Heroes', each with their own magical weapon they bring to battle. Aided by Hinata's visions and knowledge, the girls lead somewhat ordinary but adventurous lives within Marugame Castle-now converted into a school for heroes.

Wakaba regularly makes contact with Shiratori Utano- the sole hero protecting the Nagano district a lake over. The two have an Udon/Soba competition due to a debate over the two. Wakaba notices the line has become more unstable lately and grows worried for her friend.

After Doi Tamako, a member of the team, tries to 'show off' Hinata's bust, Koori Chikage walks by in the background, slightly annoyed. Takashima Yuuna then arrives, which makes Chikage delighted. The team has lunch, during which Tamako speaks out to Wakaba, then apologizes solemnly. Wakaba realizes Tamako is scared of the fight that is coming. Yuuna then comments the food was delicious, not paying attention to the previous conversation.

Wakaba is still conversing with Utano-solemnly, though. When Utano suddenly starts breaking up, Wakaba gets worried, asking her if everything is alright. It is revealed Utano is hurt and an army of Vertex is approaching, 100-1. Utano asks her to keep fighting, as the rest is in her hands. The line falls dead, and Wakaba realizes with utter terror that Nagano has fallen.

Wakaba oversees the Forestization, and vows to protect the world in Utano's place. The Vertex have arrived.

Official image of the 6 main characters

The voice actors for the main characters 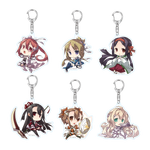 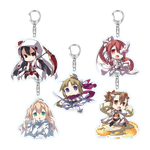 Retrieved from "https://yuyuyu.fandom.com/wiki/Nogi_Wakaba_is_a_Hero?oldid=31908"
Community content is available under CC-BY-SA unless otherwise noted.