Miyoshi Karin (三好 夏凜, Miyoshi Karin?) is a second year in middle school, and is a member of the Hero Club.

In D.E. 298, Karin, along with Kusunoki Mebuki, Miroku Yumiko, and numerous other girls, were chosen as Hero candidates to replace the recently-deceased Minowa Gin. The Taisha intended to train the candidates in hopes to pick one to be the next Hero while the others would eventually end up as Sentinels. During the two years of already intense training, Karin and Mebuki subjected themselves to an intense lifestyle on top of the already physically-demanding training they underwent were noted to have the highest marks of all the candidates. Unlike Mebuki, who actively isolated herself to continue her training, Karin would aid those in need by giving adivce on swordsmanship or taking the sick to the infirmary. Despite Mebuki having higher marks overall, in D.E. 300, the Taisha offically picked Karin to be the next Hero. Once she was christened as a Hero, Karin was assigned to the Sanshu Middle School Hero Club by the Taisha in order to oversee their activities.

In the second visual novel, Karin revealed that the reason she trained to become a Hero was that she constantly felt inferior to her older brother, who has a high position in the Taisha. Although Karin's family is still alive, she lives alone in an apartment complex.

Karin has brown hair, tied into two pigtails held by red and black ribbons. She has olive-green eyes. At school, she wears the standard school uniform with knee-length grey socks and black shoes.

In her hero form, her black and red ribbons are replaced with red, flower-shaped bows. Her outfit consists of a red, white and black dress with white lines and flower patterns on it, and black shorts underneath. She has a red flower pin on the left side of her chest and a pair of ribbons hang from the same shoulder in both the front and back. She has long, thigh-high boots that have a red and black gradient on it. Her gloves fade are a black and red gradient with white straps and lines. Her Mankai gauge, which resembles a Laurel flower, is located on her left shoulder.

Karin is depicted as a headstrong individual: stubborn, obstinate, and single-minded. She is very abrasive and finds it difficult when expressing her feelings towards others, resulting in her becoming distant towards her fellow companions. Her years of constant training have left her no time for making friends, and she claims to have never celebrated her birthday in her life. As a result, she is physically active and very intelligent, having scored near-perfect scores on her entrance exam. However, she can't resist helping whenever someone is having trouble, which is the reason she was chosen as a hero instead of Mebuki, who had slightly better grades in training [1]. In terms of her abilities as a guardian of the Taisha, Karin is revealed to be very self-confident and positive, initially believing her skills are far greater than the other members of the Hero Club. During her first encounter with the Hero Club, Karin is quite repulsed and irritated by their carefree and optimistic behavior, viewing the four of them as unworthy of being Heroes. However, despite being a highly skilled and capable guardian of the Taisha, Karin, being the only Hero out of the five to not turn Mankai during battle, she begins to feel incapable and unprofitable of the Hero club, blaming herself for not being able to protect the other members. Although Karin often lashes out at people who act friendly toward her, such as Yuuna, she is eventually revealed to be a kind, lonely girl with an inferiority complex. She ultimately comes to care deeply about her new found friends, and, over the course of the series learns to be honest with her feelings. Karin ultimately becomes very close to the members of the Hero Club.

Additionally, Karin can be described as a "Tsundere", meaning she is initially viewed as hostile and unfriendly, but in truth is actually isolated and imprecise. Although she desires to have companions, Karin, over the course of the series, continues to struggle whether or not she is supposed to be accompanied or cherished by others, viewing her only reason of living is to serve the Taisha. After joining the Hero Club, Karin realizes that she should be in full view of the Hero Club, but struggles to open up to them. This might be the result of feeling inferior to her older brother, who supposedly has more potential than her due to his high position of the Taisha. Outwardly, Karin strongly respects the Taisha, having trained for many years. Even when Fuu explains to Karin that the Taisha used her along with the other members of the Hero Club as a sacrifice, she refuses to believe it. Overall, Karin's character is highly expanded throughout the series. Thanks to the kindness of Yuuna and the others, she slowly becomes more open to the Hero Club and desires to protect the four of them at all costs. She also learns how to fight alongside them, and realizes that despite their rather insouciant temperaments, they have just the same amount of potential of being a Hero as she does, and later widely accepts that fact. Karin may continue to lash out at them on occasion but has deep feelings regarding them.

Karin's fairy, Yoshiteru, grants Karin twin katana which she dual-wields. Karin is also able to throw her katana to strike at range while being able to generate new ones. Karin also has powerful physical abilities and can sense things without being able to see them.

Karin's Mankai form takes the form of four giant, mechanical arms, each holding a large version of her katana. In addition to slashing with them, her Mankai can also fire a rain of katanas as well as unleash a sword beam. However, despite her Mankai's great power it seems to be very fragile, dissipating after taking only a single hit. It is probable that her Mankai is so fragile because of its overwhelming strength as she is able to destroy a Vertex with a single strike. Due to using Mankai multiple times in Episode 11, Karin loses the faculty of her right arm and leg, as well as both of her eyes and her ears.

Karin's classmate and fellow club member. Karin was antagonistic toward Yuuna's friendly nature when they first met, but the Hero Club's persistence caused her to slowly open up to her. She comes to care about Yuuna deeply and eventually tells her that she doesn't want to see her cry. After her fight and losing the faculty of much of her body, as a result, she thanks Yuuna for showing her what friendship is. She can also be called a tsundere towards her friends.

Karin's classmate and fellow club member. Although Karin started off rather antagonistic toward the Hero Club, Karin feels that Tougou is the one person whom she can't bully. Tougou's intense and strange behavior is often at Karin's expense, such as during her punishment game in Memories of the Forest. In time the two girls become friends, and in the second visual novel, both are united in outrage when Yuuna receives an anonymous love letter. Despite Karin having suffered much due to Tougou's attempt to destroy the world, Karin is more worried about her and Yuuna than herself during their recovery.

Karin's senior and club president. Karin initially doesn't respect Fuu as a leader and openly states that she would be able to lead the club better. Karin's stubbornness and Fuu's immaturity often make them butt heads, but they eventually grow to care about each other deeply and develop a friendly rivalry. Karin checks up on Fuu when the Taisha warn her that she is mentally unstable, which leads to their fight in Episode 9. However, they don't hold it against each other afterward.

Karin's junior and fellow club member. Unlike the rest of the Hero Club, Karin doesn't seem to be initially annoyed by Itsuki, and even openly helps her to pass her music exam. The supplementary material often shows them bonding over them both being little sisters. Later on, Karin reveals that she would like to have Itsuki as a little sister.

Karin's equal when around twenty girls were gathered to be training for the terminal of Gin Minowa. Karin won her terminal leaving a jealous stain on Mebuki. During their training days, Karin gave the same treatment to Mebuki as everyone else. Mebuki called her naive for giving her supplements to treat her muscle pain. Towards the end of Kusunoki Mebuki wa Yuusha de Aru, they meet once again and Mebuki knows why she wasn't chosen. Karin even says, "When we sort everything out, let's meet and talk again. Not like this, but at ease. When I really think about it, I don't know anything about you." To which Mebuki responds, "I agree. I don't know anything about you either Miyoshi-san. Even though we've spent quite a lot of time competing against each other back then." 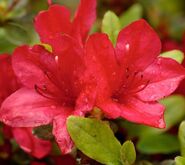 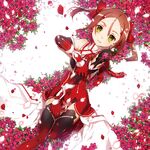 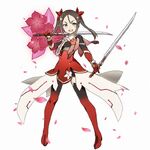 A poster featuring Karin that was part of the Kan'onji City tourism promotional project (2016). 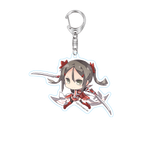 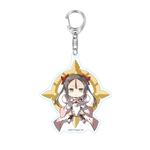 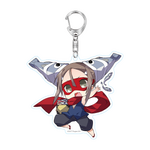 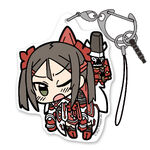 Karin with Sonoko at Sonoko's place.

This is... Hero Club quality. 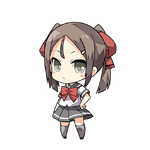