Miroku Yumiko (弥勒タ海子, Miroku Yumiko) is a major character in Kusunoki Mebuki is a Hero. She acts much like a haughty rich girl who insists she is Mebuki's "biggest rival".

Yumiko is a fair skinned teen who is above her average height. She has shoulder length tan hair. Two sections of her hair are tied by white bows and slightly curled. She seems to wear the same uniform as a civilian to everyone else in the Sentinel group but has a white appearance much like Mebuki. She has thigh socks and inside shoes normally.

Yumiko is rather conceited and competitive, especially towards Mebuki. She is also extremely foolhardy, and does not hesitate to engage in combat with Vertexes during missions; at the same time, she is also known to be wise.[1] She tries very hard to maintain her elegant and graceful appearance, such as when she assures everyone she is fine when injured. In fact, her determination to maintain appearances keeps her from revealing feelings of compassion. Despite her family's name falling into ruin, Yumiko is proud of her ancestors' achievements and vows to restore her family's name to its former glory on her own.

Yumiko hails from Kochi Prefecture. In year 72 of the Divine Era, the Miroku family helped the Akamine Family in saving many people from terrorist attacks. However, over time, the Miroku family fell into ruin and its legacy faded into obscurity. Most who know of the Miroku family, particularly noble families and those with Taisha affiliation, do not think highly of them.[2]

Yumiko was originally considered for being the successor of Minowa Gin's terminal but was one of the many candidates eliminated in favor of Miyoshi Karin and Kusunoki Mebuki. In autumn of 300 DE, she was summoned to the Gold Tower because she was chosen to serve the Taisha as a sentinel.

As a Sentinel, Yumiko is ranked #20.[3] She is a member of the offensive squad, known as "gunners". Despite spending her days doing "refined" activities, she is in top form and has proficient stamina.[4] Although her rank is unknown it seems Mebuki sees her as very useful assigning her the same order as the ranks of one to eight plus Shizuku and herself.

When the sentinels are summoned to The Gold Tower and Mebuki is assigned the role of commander, Yumiko is the only one to object. She claims training is different from real battle, and that she will achieve more than Mebuki will once their missions begin. She is shocked when initially, Mebuki does not recognize her. Yumiko then reminds her that she once competed with her and Miyoshi Karin for Minowa Gin's terminal, which then causes Mebuki to recall "a vigorous upperclassman who would recklessly charge in during mock battles".[5]

During the first mission outside the barrier, Yumiko rushes to the front of the formation to assault the incoming Stardust, much to Mebuki's chagrin. Mebuki orders her to only defeat the Stardust that attacks them, and Yumiko says that killing one more Stardust should not be a problem, adding that perhaps Yumiko's Stardust kills would cause Mebuki to feel insecure about her position as commander. She later saves Mebuki from being attacked by a horde of Stardust. She refuses to follow Mebuki's orders to return to collecting samples, saying that she is more useful for battling Stardust instead.

Yumiko joins Mebuki and Suzume during lunch. She is ignored at first, and although clearly irritated, she says that she must keep her composure as a member of the distinguished Miroku family. She carries on with her goal to accomplish more feats than Mebuki, and that when she does, she shall appoint Mebuki as her second-in-command. When Aya joins them and tells them that they are getting along, Yumiko says that they are rivals and that they do not get along. She relents, however, and focuses on her lunch, skipjack tuna. Yumiko then begins an impassioned speech about skipjack tuna, and calls for her butler, Alfred, to bring some at once. When Alfred does not appear, Yumiko says that Alfred must be "on leave", causing the others to doubt Yumiko's background.

After the mission, Yumiko boasts about how easy it was and becomes annoyed when Suzume notes that she despite claiming to not be tired, she is drenched in sweat. She also rejects Mebuki's suggestion to rest under the protection of the defenders' shields, saying she would not be able to gain more achievements if she were to rest.

During the mission, hordes of Stardust surround the sentinels. Yumiko proposes that they make a forceful evacuation, but is outvoted by Mebuki and Suzume, who choose to stay and fight the Stardust.

At the seaside park, Yumiko sits at a white table for some afternoon tea but is interrupted by Suzume and Mebuki, who informs her of a meeting at the tower. Embarrassed, Yumiko reveals that she brings the chair and table to the park herself, and asks Mebuki and Suzume to help her carry everything back.

Later, during afternoon training, Yumiko volunteers to spar with Mebuki, who effortlessly overpowers her. Mebuki then lashes out at her in frustration, her anger rooted in the Taisha's treatment of them. Yumiko calmly stands up and tells her that although she is also frustrated, lashing out will not solve anything. She also says that even although the Taisha may think little of them, it serves as more of a reason to show them what they are capable of and perform their duties to the best of their ability.

The next morning, Yumiko returns to the seaside park for morning teatime wearing a tracksuit. When Mebuki arrives for her morning run, Yumiko asks if she may accompany her. Mebuki agrees and is surprised that Yumiko is able to keep up with her. Yumiko tells her family's history and how, despite their legacy fading into obscurity, she feels great pride in their accomplishments. She also voices her resolve to restore the Miroku family to its former glory. Mebuki says that she has begun to like her, albeit slightly. Yumiko becomes flustered and picks up speed, declaring that she still plans to surpass Mebuki and take her position as commander.

During the mission, Yumiko runs outside the shields with Shizuku to defeat Stardust.

While the other sentinels retreat, Yumiko volunteers to stay behind with Mebuki and Suzume to rescue Shizuku and defeat the Scorpion Vertex. She is struck by the Vertex's tail and does not land properly, injuring her shoulder. Nonetheless, she is still able to help the others in killing it.

After the mission, Yumiko is admitted to the Taisha-controlled hospital with the others due to her severe injuries. She makes a comment that compares Mebuki's restlessness to that of skipjack tuna, which begins another argument among the girls over which local delicacy is best. The argument is interrupted when Aya brings a padlock for the girls to sign. When Yumiko signs her name, she writes "Miroku" in big letters. Until she is discharged from the hospital, most of her time is spent quarreling with Suzume.

At the celebration, Yumiko boasts to the other sentinels about her actions during the previous mission.

Following their return to the Gold Tower, Yumiko decides to accompany Mebuki during her morning and evening training exercises.

Yumiko openly expresses her anger at the Taisha's thoughtlessness in carrying out their plan to oppose the heavenly gods. She refuses to accept the Taisha's decision to sacrifice Aya and joins the other sentinels in creating a plan to rescue her.

During the mission to retrieve the seed, Yumiko becomes gravely injured when she pushes Shizuku out of the way and takes the full impact of Virgo Vertex's bombs. She is carried back to safety by Mebuki and Shizuku and was rushed to the hospital, where she received surgery and was unconscious for three days. When Yumiko wakes up, and the sentinels are overjoyed at her recovery.

One winter day, Yumiko is sitting at her table at the seaside park for teatime when Suzume throws a snowball at her, leading the two of them to engage in a snowball fight.

She is delighted upon hearing the news that the sentinels' status will be equal to those of the heroes, proud that she was able to redeem her family name.

Later, Yumiko and Mebuki are in the mess hall when they see Aya beginning her cleaning of the tower. The two of them decide to help her, fueling each other's competitive spirit. For the New Year's Eve party, Yumiko goes with Mebuki, Suzume, Shizuku, and Aya to Ines for ingredients. Seemingly disappointed that she could not hold onto Mebuki in the large crowd, she instead travels at the front of the group.

While on a mission outside the barrier, Shizuku notices a figure roaming around and Yumiko readies her rifle. Mebuki and Suzume immediately recognize the figure, however, and Mebuki sends the other sentinels back after the mission is over.

Yumiko considers Mebuki to be her "biggest rival", and seizes any opportunity to prove her worth over her. However, as the story goes on, Yumiko begins to see Mebuki more and more as an equal adversary.

Being the complete opposite of Suzume in terms of personality, Yumiko does not get along well with her. She is often subject to Suzume's frequent teasing, and the two are often seen bickering with one another.

At lunch, Yumiko encourages Shizuku to tell the others more about herself and her background. She considers both Shizuku and Shizuku to be good allies and important friends worth sacrificing her life for.

When the others begin to doubt Yumiko's rich background, Aya believes her, noting that the Miroku family helped the Akamine family save Shikoku in the early years of the Divine Era.[6] Deeply touched, Yumiko hugs Aya.

Yumiko as she appears in the 4koma "Mebuki is Training Now!!" 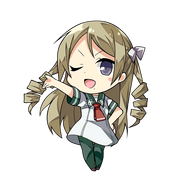 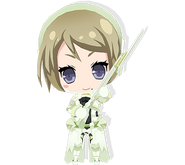 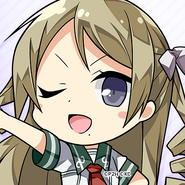 Retrieved from "https://yuyuyu.fandom.com/wiki/Miroku_Yumiko?oldid=24597"
Community content is available under CC-BY-SA unless otherwise noted.