Aya is a pale-skinned pre-teen slightly below average height. She has gray eyes and back length tan hair. Although she is a first-year middle-schooler, she is noted to look much younger, and Mebuki initially mistook her for an elementary school student.[1]

As a miko, she wears a white hakama trouser paired with a white haori with green lacing. There is a red long skirt under and wears socks and flippers. Aya also has ribbons to tie up two sections of her hair. Other than a set of pajamas, her miko outfit is the only outfit she owns. [2]

Aya is extremely kind and treats the Sentinels all with the same treatment. When she speaks, it is always in earnest. Aya states she feels regret just watching the Sentinels come back bleeding and with injuries. She does anything to be able to help the Sentinels. Despite knowing the truth about the state of the world and losing contact with her family at a very young age, she never lost her gentle spirit and genuinely trusts in the Shinju.

Aya's favorite hobby is cleaning. Whenever she has free time, she enjoys cleaning the inside of the tower and even the sentinels' rooms.[3]

Aya is a Miko to the Sentinels in the series Kusunoki Mebuki is a Hero. As a miko, she is forbidden to interact with ordinary civilians, and even contact with her family is limited.[4] She has lived under strict miko training by the Taisha from an early age, and by the series' beginning, she has already gone through a considerable amount of training.[5]

As a miko, she is able to hear the voice of God but the Sentinals do not fight the Vertex unless the few times Stardust form to create an imperfect Vertex.

When venturing outside the wall to perform the Kuni-zukuri Ritual, she wears a special outfit called a Hagoromo. Made from a similar material to the Sentinel battle suits, it protects her from the intense heat. However, it does not increase her strength or give her combat abilities.

Aya prays over the Sentinels for their safety before they embark on their first expedition outside the wall. Although she trusts that the girls will return safely, she is still aware of the dangers outside the wall, and this deeply troubles her.

Aya joins Mebuki and Yumiko during lunch, stopping the two from bickering. That morning, she was praying to the Shinju for the Sentinels' success and safety and apologizes to Mebuki for missing class as a result. She hopes that the Sentinels who quit will continue to be under the Shinju's protection.

She later accompanies the Sentinels at the dojo in The Gold Tower's training facility. She warns Mebuki, not to overwork and injures herself during her exercises. She remains silent during the fight between Mebuki and Shizuku, but tells Mebuki afterward, that she admires her determination to achieve her goals. Shizuku chides her for joining in on their conversation, but Aya tells Shizuku that despite her rude tone, she still knows that she is a good person.[6] She joins Mebuki's and Shizuku's hands together, saying that now that they are friends, they should try to get along.

During dinner, Aya remarks how amazing it is that the Sentinels had received very little injuries during their mission outside the wall. When Shizuku is worried about causing Mebuki trouble, Aya tells her that she collected the highest amount of magma sample. She tells Yumiko and the others that they should be thankful to the Shinju for keeping them under their divine protection and that the results of the expedition were much better than expected.

The next day, she watches Mebuki's frustration grow as more of her fellow Sentinels pester her with questions about Miyoshi Karin, and explains that not many people have seen the Heroes or know anything about them. After listening to Suzume's story of her encounter with the heroes, Aya agrees that although Suzume acts cowardly, she possesses a great amount of bravery as well.

Aya consoles Mebuki in the bath after the confrontational training session. She embraces Mebuki and pats her head, empathizing with her tendency to set very high expectations for herself and her disappointment when those expectations are not met. However, she greatly admires Mebuki's stubborn perseverance and smiles when she vows to prove the Sentinels' worth to the Taisha. While in the bath, they also discuss the upcoming mission, and Aya reveals that she was initially terrified of being informed of her duty to perform the Kuni-zukuri Ritual outside the wall. However, she found strength in being able to help the sentinels and tells Mebuki that when she prays to the Shinju, she will tell them how hard Mebuki is working.

Later that day, during the mission, Aya ventures outside the wall with the Sentinels as her escorts. Because she lacks their increased physical abilities, they walk at a slower pace. She shares the legend behind her Hagoromo with Mebuki, who feels suspicious about the Taisha naming her outfit after a sacred object that "allows the user to return to heaven". Once they reach the proper location, Aya performs the ritual and the seed begins to sprout endless greenery. The ritual is interrupted, however, by Scorpio Vertex.

Scorpio Vertex begins swinging its poisonous tail at the sentinels, aiming for Aya. Mebuki is quickly able to devise a plan to get Aya away from the Vertex's attacks, and the sentinels are forced to retreat.

Aya visits Mebuki and the others at the hospital, bringing them fruit, and continues to visit them almost every single day until they recover. After the Sentinels spend a week in the hospital, Aya returns to the hospital room with a padlock. She says that the sentinels are buying padlocks, writing their names on it, and keeping it on the roof the Gold Tower to symbolize their strong and unbreakable bonds. Everyone signs the padlock, and Aya tearfully thanks her friends for being safe.

When Mebuki, Suzume, Yumiko, and Shizuku are finally discharged from the hospital, Aya and the other sentinels throw them a surprise party to celebrate their return.

Later, Aya is sent to Taisha headquarters along with five other mikos in preparation for the Fire Offering Ceremony.

Aya stands next to the Taisha priestess during the announcement of her sacrifice in next week's Fire Offering Festival. She remains silent during the announcement, but when Mebuki stands up in protest, Aya smiles and says that she is happy that she can be of use to everyone and the Shinju. She is then escorted out of the Gold Tower by Taisha personnel.

After the sentinels' mission to retrieve the seed from outside the wall, Aya returns to visit Mebuki. As the other sentinels welcome Aya's return, the Taisha priestess explains that she was released from her duty and that one of the heroes has volunteered to take her place instead.

Aya calls to the sentinels, informing them to meet at the viewing platform for an announcement.

Later, on December 30, 300 DE, Aya wake up earlier than usual to begin her housekeeping routine, since she is planning to clean the entire tower over the next two days. Initially, she tries to refuse the sentinels' offers to help her clean but eventually relents. She later thanks them for their help, as the cleaning was finished a day earlier than she expected thanks to them. Since there are now no plans for New Year's Eve, the girls decide to throw a party at the tower.

The next day, Aya goes to Ines with the sentinels, borrowing Mebuki's clothes so that she does not stand out in her miko outfit. She goes with Mebuki, Yumiko, Suzume, and Shizuku to buy ingredients for the party, holding Mebuki's left hand so that she does not get lost in the crowd. She also convinces Mebuki to return home to visit her father on New Year's Day.

In the middle of January, once the sentinels resume their duties, Aya returns atop the wall to send them off. After enough soil samples are collected from outside the wall, Mebuki sends her back with the other sentinels.

Aya is extremely close to Mebuki more than the other Sentinels and is always there to comfort her. Aya tries to help as much as she can and gives any information the Taisha gave her to Mebuki. Aya was one of the first people to get close to Mebuki.

The Other Sentinals Edit

Aya knows each Sentinal by name, and regularly prays for each of them at the local shrine individually.

Aya ventures outside the wall.

Aya as she appears in the 4koma "Mebuki is Training Now!!" 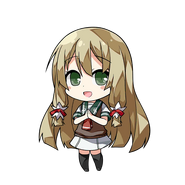 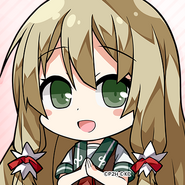 Retrieved from "https://yuyuyu.fandom.com/wiki/Kokudo_Aya?oldid=24389"
Community content is available under CC-BY-SA unless otherwise noted.