Kiryuu Shizuka (桐生 静, Kiryū Shizuka?) is a Miko but of a slightly special kind, the duty is to purge evil, those who disturb the peace.

Shizuka aided Akamine Yuuna and Miroku Renge with oracles from the Shinju. She's from Zouzu in Kagawa, from the beginning of the Divine Era.

Shizuka has long, grey hair tied up in a messy bun with a yellow bead and feather charm hanging off of it. She has green, cat-like eyes and fair skin.

She wears a white, long-sleeved shirt with frills decorating collar down to the bust. A black dress is worn over it that has four golden buttons on the frontside and extends to her knees. She wears black and white sneakers with no socks.

She acts rather highly over her friends Yuuna and Renge, but really does care about them like an elder sister. She likes to analyze people and their "character". She speaks in Osaka accent because of her love for comedy and she caught the dialect when watching videos and performances. She had zero friends when she was little, she was lonely. And comedy saved her. She got friends now, could be because comedy made her more cheerful. And all that influence from comedy got her talking like this. A comedy version of chuunibyou.

Shizuka aids both Akamine Yuuna and Miroku Renge in battling against the Vertex Terrorists. She gives the two most of the exposition.

Unlike other Mikos whose often associated with Sakaki, Shizuka's flower motif is Lupin, which is said to represent imagination and always happy, as well as voraciousness. 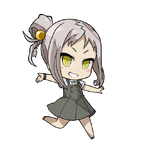 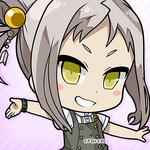 Retrieved from "https://yuyuyu.fandom.com/wiki/Kiryuu_Shizuka?oldid=32413"
Community content is available under CC-BY-SA unless otherwise noted.