Kagajou Suzume (加賀城 雀, Kagajō Suzume?) is a major character in the Kusunoki Mebuki is a Hero series. She is a weak and timid girl and number 32 of the Sentinels.

Suzume is a fair-skinned teenager who is slightly below average height. She has dark brown hair with it slightly parting in the middle and two long pieces of hair to shoulder length. She wears a blackish sweater with a green with white lines also with a white shirt and green underline. She has a small tie that is red. She wears a white skirt, green knee socks and outside shoes for her school.

Suzume is very squeamish and always begs Mebuki to save her telling her she'll die without her. Near chapter 4, she pulled her confidence together and defended Mebuki from an invading incomplete Vertex and Stardust.

Suzume ranks as number thirty-two making her the least capable of the entire sentinel group. Due to this, she is part of the defensive squad of eight sentinels armed with a massive shield. When push comes to shove, she will save someone from their demise from a stardust. As normal, she wears a greenish hue dress with additional armor to withstand the World of Flames.

Suzume is always relying on Mebuki to which she doesn't mind. Suzume states "she will die" if Mebuki is not protecting her. It seems Suzume respects Mebuki and will protect her as a defensive squad if push comes to shove. It also seems she wants her to pay attention to her instead of Aya.

Suzume met the Sanshu Middle School Hero Club during self-proclaimed "reconnaissance". She was initially fearful of them, worried they were more like powerful warriors of legend not on equal terms with mortals. Upon actually meeting them, she was surprised just how normal they acted. They treated her with kindness.

Suzume as she appears in the 4koma "Mebuki is Training Now!!" 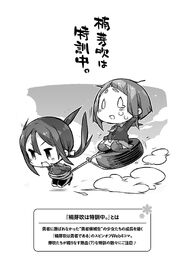 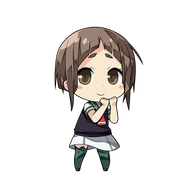 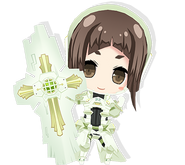 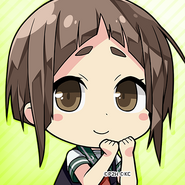 Retrieved from "https://yuyuyu.fandom.com/wiki/Kagajou_Suzume?oldid=24600"
Community content is available under CC-BY-SA unless otherwise noted.