Doi Tamako (土居 球子, Doi Tamako?) is one of the main characters of the light novel Nogi Wakaba is a Hero. She was a part of the first Hero team.

Tamako has short brown hair with two shoulder-length bangs and two small buns that are each tied with an orange and black hair tie. Her school uniform consists of a white shirt with a violet bow and a navy blue skirt with a light blue line. However, most of it is covered by her orange and black jacket.

Her Hero form's outfit is an orange, black and white suit with two coattails in the back and two in the front. Tamako also wears orange and black gloves, and her buns are tied with orange ribbons that may be considered to be in a flower-like shape. These ribbons appear to be connected to two clips that extend from the back to the front of her head.

Tamako is an energetic, emotionally-driven girl that is very fond of the outdoors. She tends to laugh a lot and gets angry easily. She is also fond of making puns with her first name (Tamako), as well as talking in the third person. She is protective of her friends and tries to prevent them from being hurt.

Tamako's Hero form gives her a bladed shield named Kamuyatatehime to battle with. It can be used as a weapon similar to a yo-yo because it can be thrown and returned, but it can also be used as a blade when swung around.

Her usual trump card is Wan Yuudou, which can enlarge her shield to the points the girls can all stand on it with room to spare. Once thrown, Tamako can control it without having to use the string. When wanted, it will spew fire. When activated, Tamako's outfit changes to a kimono similar to Mankai, and a large gold ring surrounding her neck. Two long ribbons extend from a place on her chest.

Tamako and Anzu are described as being very close to each other, similar to siblings. Anzu thinks of Tamako as her "senpai". Tamako has asked why they haven't gone out already, although she was joking when she said this.

When Anzu is unconscious in Chapter 13, Tamako is desperate to protect her and uses her weapon as a shield for both of them. When they are fatally injured by the Vertex, she grabs Anzu's hand as she dies. 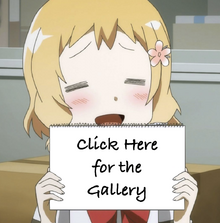 Retrieved from "https://yuyuyu.fandom.com/wiki/Doi_Tamako?oldid=24732"
Community content is available under CC-BY-SA unless otherwise noted.