Aki-Sensei (安芸先生 Aki-sensei) is a character in Washio Sumi is a Hero, being the girls' instructor and mentor in their Hero training. After the Sange of Nogi Sonoko, she became a Taisha priestess.

Aki-sensei is a tall and well-endowed woman. She has glasses, green-brown hair that she often ties back in a side ponytail, and lets some bangs hand over her eyes. As a teacher, she wore a green shirt with a dark green bow and a forest green skirt. She had gray leggings and black kitten heels.

When she became a Taisha priestess, she wore the de facto clothing, but unlike others continued to hang her bangs over her forehead like she always did so she could distinguish herself. She did not wear glasses during this time.

After the perishing of the Shinju, she lost an eye due to it being the starting point of her transformation into a sacred wheat.

Aki-sensei is strict and stern with her students but is not disliked. She does have a talent for scaring some students into submission. Underneath, Aki-sensei is kind and willing to help. 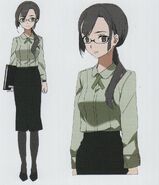 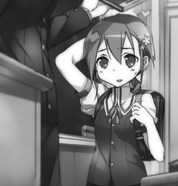 A cameo in the novel.

Aki-sensei on the cover of Chapter 2 in Kusunoki Mebuki is a Hero.

Her appearance in the first version of the manga.

Retrieved from "https://yuyuyu.fandom.com/wiki/Aki-Sensei?oldid=23648"
Community content is available under CC-BY-SA unless otherwise noted.