Start a Wiki
Akamine Yuna (赤嶺 友奈, Akamine Yūna?) is a character from the mobile game Yuki Yuna is a Hero: A Sparkling Bouquet. She is a hero summoned by the rebelling gods within the Shinju and serves as an antagonist to the other heroes.

She was originally aided by Miroku Renge and Kiryu Shizuka during her era.

Yuna is a member of the esteemed Akamine Family, who was originally from Okinawa but escaped to Shikoku with the help of Kohagura Natsume. According to her, the state of Shikoku in her time was "complicated", and carrying out her duties often involved attacking other humans. It was revealed that their role was only to fight humans. Akamine says herself that fear of the vertex was close to respect and humans would worship the heavenly gods. They become infamous amongst the Taisha families for fighting against the humans that would worship the heavenly gods. It was also noted that she came a generation after Nogi Wakaba's team.

During her time, she worked alongside Miroku Renge and Kiryu Shizuka, with herself and Renge acting as "signal arrows".

Despite sharing features with both Yuki Yuna and Takashima Yuna, her overall appearance is strikingly different. When in her Hero form, she has pink eyes and shoulder-length pink hair tied up with a red ribbon and supported with white headgear. Her hero outfit has a black, red, and beige color scheme. She sports a large red pauldron and a gauntlet with a blade attached.

Upon meeting the other heroes, Yuna is rather affable, especially towards the other Yunas. She even expresses that she is particularly glad to meet

Takashima Yuna. She mentions that she can not explain things well, and doing so often resorts to her using onomatopoeias.

Yuna is also quite cunning and calculating, as she was able to evade the heroes' until the second battle for Ehime.

During her time, Yuna received her powers directly from the Shinju, similarly to how Nogi Wakaba's powers awakened.[1] It was soon revealed that her power in her time was actually very weak compared to other heroes. The Shinju only gave her enough power to fight humans not vertex.

Since Yuna was summoned to the Shinju's special world by the rebelling gods, she has the ability to control the Vertex. She can also create gusts of wind that allow her to appear and disappear quickly as well as perform a "body replacement technique" that allows her to escape others' grasp.

Her fairy, given to her by the rebelling gods, can shapeshift into the form of other human beings. Should the person whose form it takes wishes to defeat it, it will enter the person's mind and ask questions, some of which can be quite personal. If the person fails to answer the fairy's questions and defeat it, it will possess them.

Like the other Yunas, Akamine is presumed to have a cherry blossom motif, specifically the Okinawan Cherry Blossom, due to it's red petals. On her SSR card, however, she has a wheat motif. 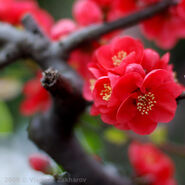 A deep red cherry blossom variation.
Add a photo to this gallery 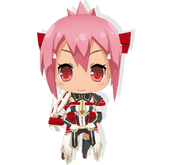 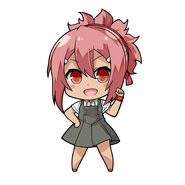 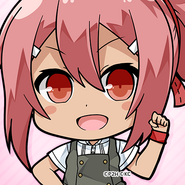 Retrieved from "https://yuyuyu.fandom.com/wiki/Akamine_Yuna?oldid=23808"
Community content is available under CC-BY-SA unless otherwise noted.